I’m not a fan of Microsoft. It’s been years since the problems and the failings of Microsoft Word outweighed all its benefits for me but it did and it does have those benefits. Microsoft Excel is and always has been very good. PowerPoint – well, let’s not do that. No need to be rude.

So for years my only interest in whether Microsoft would bring its Office software to the iPad was a kind of business fascination. It used to be that Word was so big, nothing else breathed at all. You can be certain that there were people in Microsoft who believed that keeping Word and Excel off the iPad would kill Apple’s tablet. Be certain of that. Because they were.

And, demonstrably, they were wrong. I think they were wrong enough that it has damaged them. Not because selling Microsoft Word for iPad on day one of the iPad would’ve brought in a lot of cash and kept on doing so for all these years. But because refusing to do it meant people had to find other word processors and other spreadsheets.

There are other factors that have made Word stumble and I don’t know what they are. But it’s now getting on for eight years since Microsoft switched Word over to the .docx format and still people send you the old .doc ones. Nearly a decade and people have not upgraded.

In The Blank Screen book I mention discovering after a month that I hadn’t got Word on my MacBook. And a little while ago I thought I was going to write you a news story about how Microsoft Word, Excel and the other one are now available for free on iPad. But instead, I’m thinking about how tedious it would be to switch to Word again.

Let me explain one thing. You have been able to download Word and Excel and the other one for some months now and you could read documents, you just couldn’t create or edit any – unless you paid a subscription.

As of today, not so much. You still can and you still get benefits from having that but you can use Word without it. All you have to do is sign for a free Microsoft account and off you go.

I signed up and off I went. And I also linked my Dropbox account so I could get to a lot of my current and recent documents here on the iPad. It was a chore looking through them all for documents I could open and in the end I just wrote a new one. 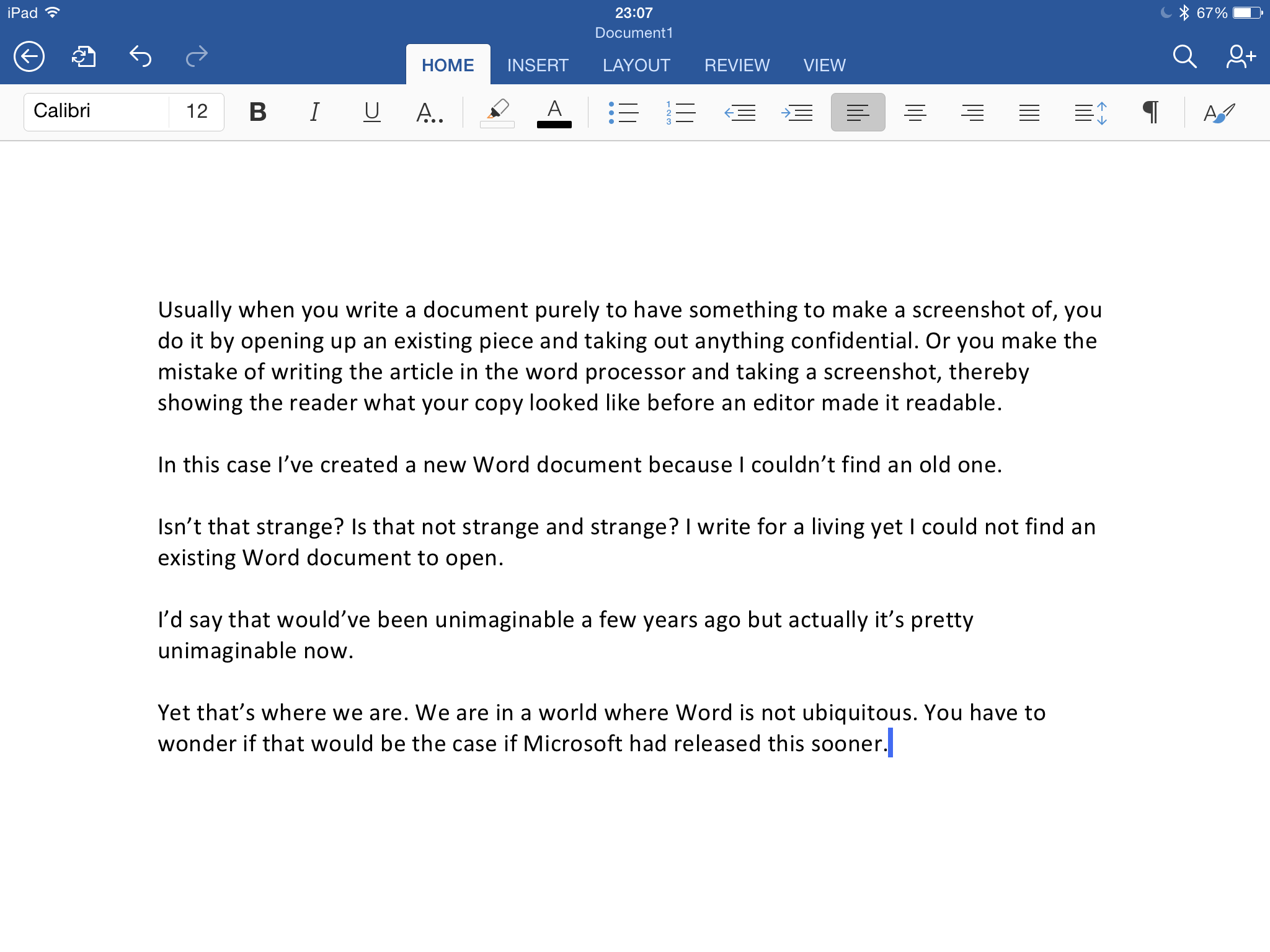 Microsoft Word for iPad is good. It feels better than the PC and Mac ones. But it’s too late for Word to be anything other than a curiosity to me now. I wondering whether that’s the case for most people.

Go take a look for yourself: Microsoft Word, Microsoft Excel and Microsoft The Other One are all on the iOS app store now.