Let’s be clear here, I think this is a persuasive argument for a watch that connects to your phone and relays information. A smart watch. An iWatch, if you will. But I don’t think it’s persuasive enough to make me want to buy an Android phone. Plus, the fella is a fan of Google Glass so you have to make allowances.

I was also put off the topic by recent torrential rumours of Apple’s one being tied to health topics and health monitoring. I don’t want my watch telling me to exercise more.

And I am put back on the topic every time I see a Moto 360 image like this: 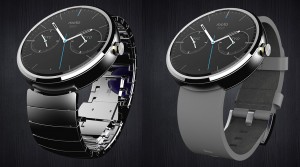 Nobody’s saying when that will be released or what it will cost and there is an issue over how it’s apparently bigger than you think. Plus, I think it requires a phone to connect to and that this phone can’t be an iPhone one. But still, every time I see that, I think I could handle wearing a smart watch.

That’s not a reasoned or experienced analysis, but even though it is heavily Android-weighted, this is:

As was the case with the iPad, the experience of using an Android Wear device is transformative and completely unlike what you might imagine it to be. You have to experience it to understand its pull.

Yes: Android Wear is flawed, clunky and not ready for prime time. The LG G watch I’m using is too bulky and square — the round ones will be much better. And even the coveted round Moto 360 is too big.

But Android Wear watches are the first smartwatches to cross the line from awkward to awesome, because they’re the first to completely abandon the smartphone’s icons, menus and widgets paradigm and massively leverage subtle contextual cues, images, icons and colors to present tiny nuggets of information in their most essential and quickly graspable form.

I jumped back into the car and started slowly clawing my way through city traffic to head back home to Petaluma. At my first red light, I began wondering about the exact definition of a word that I sometimes use with a general but not exact understanding of its definition. Without even removing my hand from the wheel, I turned my wrist slightly and said in completely natural speech: “OK, Google: Define rife.” About a second later, the definition silently appeared on my wrist. I scanned the definition and said “Wow!” Then the light changed and I drove off.

Looking up a word is the least powerful, least interesting thing one might do with wearable technology. Yet it was thrilling because of where and how the interaction occurred. The wrist is a perfect place for instant, quickly scannable data. All the we-don’t-have-to-accept-ignorance qualities of the smartphone revolution are multiplied when an Android Wear watch is on your wrist.

Over the next few hours, simple notifications appeared, which gave me nice nuggets of knowledge without causing any disruptive shift in attention. It was like Google Glass, but more subtle and therefore more intimate and personal.

Here’s the most important takeaway from this column — the wrist is a spectacularly perfect place to get notifications, launch voice commands and get Google Now cards. Like the iPad, it feels so good — you’ll know it when you feel it.