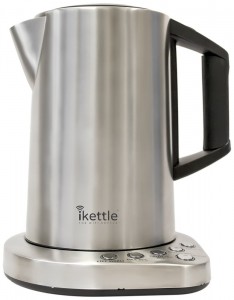 Don’t let me buy this.

For the past few months, I’ve mentioned this kettle in my Blank Screen workshops but have had to say that it’s only available in the States. Now it’s officially here in the UK but I’d like you first to wait until it’s actually stocked – Amazon UK says temporarily out and Firebox says coming 23 April – and second to just think about what a wifi kettle means.

Stumbled in the front door from work exhausted? Nervy half-time ad break during the World Cup final? Slaving away on a late night project and can’t waste a second? Whatever the urgent hot-drink scenario, a simple one-touch setup allows you to instantly control the iKettle from anywhere in the house with your smart-phone.

I work at home and wouldn’t know one end of a football from the other, but yeah, otherwise, that’s me. I am drawn to the idea of being able to tap a button on my iPhone and have this kettle go boil itself in my kitchen. And for it to then send a push notification back that it’s done.

The kettle is £99.99 UK, or will be, depending on whose release date you see first. That’s not a problem. Well, it’s not a convenience either, but if you were in the market for a kettle and were looking north of whatever’s on sale at Tesco, you could spend a lot more. Seriously more. Amazon lists some kettles for over £300 apiece. So the £100 iKettle with wifi isn’t a bargain but it looks like one next to these others.

That’s not the except.

The except is that I know. I know. I absolutely know that I would press that button without having thought to put water in.

So I reckon that would work out at about one hundred pounds per mug of tea.