Just to say, it kills me beginning a blog title or actually any sentence with a number. It’s as knife-scraping as beginning one with a lowercase letter. Consequently, having written very many articles and news stories about the likes of the iPhone, I’m used to contorting headlines to fit in one word, any word, before the offending digit or lowercase. In this one situation, though, putting anything before “58 Keys” would change it.

“The 58 Keys” would make you think of John Buchan’s The 39 Steps, for instance. “The Mystery of the 58 Keys” is Agatha Christie if you’re normal, Alfred Hitchcock and the Three Investigators if you’re less so.

Mind you, just saying 58 Keys is at risk of putting you in mind of either Edgar Allen Poe or, in a slightly different chain of thought, Florida.

Somehow I think it’s fitting, however, that you are very unlikely to read that title and know what this is about yet it is impossible that you haven’t been affected by it. Now it sounds like a disease.

It’s just this. I offer that every artistic, sporting, engineering, scientific, medical, architectural, sculptural, scriptural, design or really any human endeavour, any human thought of the last thirty years has gone via a keyboard. That’s obviously true for writers but a sculptural artist, say, he or she may work with stone and chisels but at some point they email a gallery describing it.

Amateur photographers not intending to ever sell their work and, let’s go to an extreme here, too illiterate to write a caption, they still use a keyboard. Whether it’s holding down the Option key as they choose a function in Photoshop or it’s logging in to Flickr as CrazyNutBoy99, they use a keyboard.

We never think about this, most especially not if we’re touch typists, because we’re thinking about the work we do. The keyboard and our fingers on it are the bridge from our thoughts to the physical reality of what we’re creating. And I’m just fascinated by that. I’m fascinated by how pressing these keys means I get to talk to you. By how using exactly the same keys I will unthinkingly, unconsciously switch from writing words to issuing commands: I press Command-S to save my work do much that the S key is worn down.

If you’re reading this on a phone or a tablet then you’ve got an onscreen keyboard that pops up when you need it and hides away again when you don’t. If you’re on a laptop then these days the keys are probably what’s called a Chiclet style unless it’s a Butterfly mechanism or in Microsoft’s case a curious cloth-like one.

The type of key varies from silent and virtual to the mechanical Cherry keyboard that clacks away terribly satisfyingly to the ears of those of us trained on manual typewriters. The number of keys varies a lot too. It’s not that I usually go around counting them, honest, it’s more that for decades the standard layout for a computer keyboard has been what’s called the PC AT one with 102 keys. When you see the QWERTY layout with a numeric keypad to the right and arrow keys between the two, it’s probably 102 keys.

That is a standard, whether you’re using QWERTY or something like France’s AZERTY. That is also a standard whether you’re in the UK or the US, though for unfathomable historical reasons, our two nations have different keyboards. In the UK, the Return key is a tall one that takes up the space of two keys vertically. In America, it’s a wide one that takes up two key spaces horizontally. Nutters.

Even so, it’s the same number of keys and you have never looked at me so strangely before. Let me hurry to explain why I’ve called this 58 Keys and not 102. 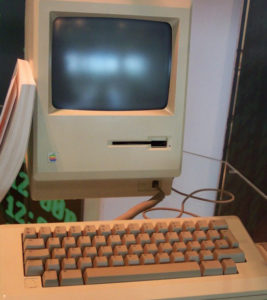 There should’ve been 62. People at Apple fought over four more keys and they lost. Steve Jobs rejected four keys. He rejected the arrow keys. You can think that’s taking micro-management too far, but there was a reason.

He refused to allow the original Mac keyboard to have these arrow or cursor keys because if it had them, people would use them. Since it didn’t, there was no other way to move your cursor around the screen than to use the mouse. This was the first time any public computer had included a mouse and, as strange as it seems today, it was bloody hard to grasp what in the world this thing was for.

Even if you have never used a Mac, even if you’re a die-hard PC fan and even if you’ve only ever had your phone as a computer, the decision to give the Mac just 58 keys shaped everything we do today.

There’s no reason to say this to you now, no particular anniversary, no keyboard launch and definitely no way to explain why I currently have about nine keyboards in my house. But you will spend time at some keyboard today, whether that’s onscreen or physical, and you will every day. We could get really deep into how mechanical keys work, we could dive into how onscreen keyboards invisibly expand the letter you’re most likely to type next. But let’s just take a moment to notice how this small thing has world-changing impact.