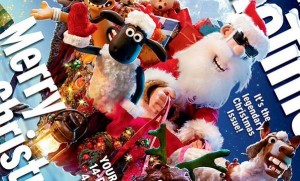 For the past 46 years, Radio Times magazine has produced a double issue of television and radio listings covering Christmas and New Year fortnight. Anything that lasts that many years, and looks set to continue forever, is going to build up a certain history but RT was at the heart of Christmas. It’s not unreasonable to say that Christmas wasn’t Christmas without Radio Times. I don’t think it is so special or important any more, I think the fondness we have for this issue is momentum from when it was usually the best and sometimes the only way to know what was on TV.

It’s the biggest-selling issue of the year by far and certain planning for it begins in January. That’s logistical planning to do with the print runs and the distribution. Editorial planning begins much later and I’ve completely forgotten when.

Even though I spent many years at Radio Times, chiefly on the website but also often writing for the magazine, I can’t remember when it all begins. I just remember that there is a stretch of weeks when you’re working on the regular weekly magazine plus the Christmas one. It’s known as pickup and I do not know why. Because you have to pick up the pace? I don’t know.

Pickup is exhausting and I’m thinking of all this now partly because the 2015 one should be out this weekend but also because there was a photo on Facebook of RT people working late into the night. I’d forgotten the exhaustion. Not that I ever truly experienced it to the extent the full time staff did.

But when I was writing their On This Day television history column, there was a point around late November when I would have to deliver five weeks’ worth in one go to meet all the various deadlines. That wasn’t easy.

Then – I can look back at this fondly because it was a long time ago but actually I was quite fond of it at the time – the Radio Times website used to have its own pickup period. Being online, the site’s pickup period used to begin the moment the magazine’s one finished. And for a couple of rather glorious years, I used to work on the magazine’s pickup and then immediately swap over the site’s one. Loved it.

I’d have to ask before I could tell you with any confidence when I left Radio Times but it has to be a lot of years ago now. And yet if you get the Christmas Double Issue and you look very, very hard, you will find my name and an entire 100 words I wrote.

I’ll take that. Christmas wouldn’t be Christmas for me if I weren’t in the Double Issue.