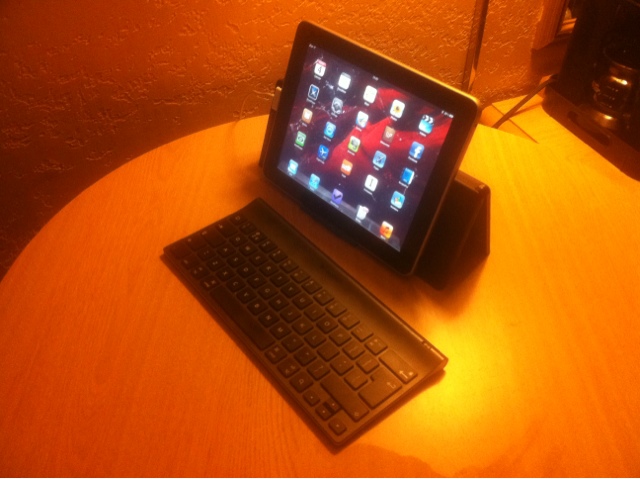 Back in June 2010, I really wanted to know whether Apple’s then-new iPad was genuinely useful for writers or whether I just fancied getting one. Nobody seemed to have written about exactly the things I wanted to know, so I selflessly bought one to find out and tell you.

Now I’m bemused that it was only June 2010. Just as with my iPhone, this iPad has become so much a part of my every day work that I don’t understand that I’ve only had it a short time.

But about two or three weeks ago when I was booking flights for a trip, I really wanted to know whether I could get by only taking my iPad. This time there are many articles out there about replacing your MacBook or your PC with an iPad but that’s not quite what I was thinking. Forget what I would normally have used or normally would’ve taken, given the jobs I needed to do, could my iPad cut it?

I have selflessly gone on a ten-day trip the States to find out for you. I’m about halfway through and writing to you from a film noir-style motel that looks right out of Veronica Mars to me. It’s all business in Florida with a completely accidental stopover in New York. Both ways. And within which I’ve managed to arrange some drama meetings.

So there are two things for you right there: Florida business and New York drama. It was impossible to do the work without taking something, and I gambled on taking just my iPad. Ten days is right on the edge of how much clothing you can pack, even though I could cut that down because I knew I’d have washing facilities. If I added my MacBook Pro then as small as it is, that’s another chunk of packing and then there’s the mains cable. There is no possibility that I’m going to let my MacBook Pro get chucked in the hold so adding that one thing would automatically mean two bags instead of one.

Which means everything taking longer. And since my time in New York, especially, is very tight, it made a difference. With multiple bags, I’d have taken a cab from JFK. With only carry-on luggage, I skipped baggage reclaim and was on the New York City subway system at lightspeed.

All of which is great if my iPad did what I needed.

Pretty much, yes. There’ve been some problems. Yesterday I thought I needed to print out some legal documents and I was able to use my iPad to connect remotely to my office Mac in England and email myself the forms, but there proved no way to print them out here. If I were staying in a fancier hotel, it might be different.

Oddly, this blog has been the hardest part to write: for some reason Google insists I want to write it in HTML and never want, for instance, to press Return when I could type me some line break tag instead.

And I did hit a Flash problem. If you know what Flash is, you know that it’s a problem. Even when it works, it’s a problem. But it was flavour of the minute once and I can tell you now that certain official US corporate websites require Flash for no very good reason. Just to enter account numbers into a form, they need Flash. This smacks of a bored web designer to me.

But iPads will not play nice with Flash so I did remote-control my office Mac again and fill out the form there, some 4,000 miles away from me.

Then iPads kind of make you do one thing at a time. You read books on them, or you email, or you write, or you watch films, you don’t tend to skip about between them. And I had to do more of that than usual: I’d look up a tiny detail of some PDF legal form here and need to research another detail about it on a US business website there. Business means financial too so I was checking online banking, moving funds around, recording everything and that meant swapping from the Numbers spreadsheet to the web browser and back and to and back and to.

Two days ago that was fine: I zipped back and forth like nobody’s business. Today, not so much.

If you do something that uses up an iPad’s RAM then when you swap back to, say, the web browser Safari, it won’t have been able to hold the page in memory and so must get it again. That’s fine, but with online banking that’s seen as your logging out of the secure system so today I was re-logging in.

And a similar thing happened with Numbers: when I went back to that spreadsheet, the document had closed.

I get it and it’s not a gigantic deal, but I don’t get how it was happening today when I was in a hurry and not yesterday when I was also in a hurry. You thought the word hurry was key, didn’t you?

Typing. That’s one thing I forgot. I have written thousands of words on my iPad without getting an extra, external keyboard. Thousands of words typed directly on the glass. But it is slower and my fingers do blunt a bit, so shortly before I left the UK I bought an external keyboard. A Logitech Tablet Keyboard for iPad. Quite often it gives me a double character when I first start typing, but otherwise it’s so good that it is transformational.

While we’ve been talking, my iPad has been downloading a film off iTunes for me. Angela is away on holiday and mentioned that she’d watched The Third Man last night: call me daft, but I want to watch it with her, so to speak. So I rented it off iTunes and will watch it in a mo.

This one piece of metal, glass and plastic has been how I’ve run my business for this trip. It’s how I’ve kept in touch with people. Perhaps madly, it’s how I’ve been arranging drama meetings back in London. And it’s been entertainment. I’ve read books, I’ve read scripts, I’ve watched many TV episodes, I’ve watched a film or two and I’ve listened to music a lot.

This would be an ad for iPads except for one thing.

As I write this, it’s Tuesday evening Eastern Standard Time and a new iPad will be announced tomorrow. Plainly, I’m not writing on that new iPad tonight but I’m also not writing on the previous one, the iPad 2.

This is the same iPad I bought right back in June 2010. I’ve sat with friends who have iPad 2s and those are clearly enormously faster. I know that business with Safari pages and Numbers spreadsheets closing does not happen with iPad 2. And the iPad 2 does have cameras to let you use FaceTime. No question, iPad 2 is very good. One presumes iPad 3 is going to be better still, though search me how.

But I’ve no reason to buy it. Except fancying it, obviously. As much as I’ve grown accustomed to having my original iPad with me everywhere, this trip has made me appreciate it even more.

Mind you, if you fancied buying an original, nay, classic iPad… one careful if very constant user… You’d have to tear it out of my hands but I’d throw in the original box on my way to the Apple Store…