I do like internet memes, even if I don’t know how to pronounce that and am not 100% sure that it’s the correct plural of meme. You couldn’t put me straight, could you?

But of all these interest-of-the-moment ideas that float around blogs and to which everyone contributes their version, I’ve rarely been bothered – or at least, I’ve rarely been bothered in time. Bits about writing, bits about TV drama, I’ve had my opinions and I’ve kept my counsel primarily because I’ve just not been quick enough to slip into the zeitgeisty feel of it all.

I’m not any faster today.

But what I admit I’ve lost in speed, by God I’m going to make up for in enthusiasm. I am so enthusiastic about this one that I positively begged Piers Beckley to tag me in this meme lark so I could gush at you. It’s the now probably long-forgotten meme about where we all work; the spaces we make for ourselves and our writing. You’ve got one, everyone’s got one, I’ve probably seen yours on your blog too, but now it’s me.

I’m arrested by this whole meme because a simple desk in a corner becomes so important. Very, very good days flow through this – and so do very, very bad ones. When I’m up against deadlines so much that it’s fraught and if I don’t take five minutes out I will fry, the place I escape to from my keyboard is my keyboard. I lean back from Word or Photoshop and watch a bit of the news, or play some music, maybe flick through some of the hundreds of hours of TV drama I’ve got on my Mac.

It’s like the way I am fascinated by keyboards. Partly it’s a technical thing and an overhang from my computer magazine days when I’d use so many of them that I was very aware of the differences. I’m on my third keyboard for this Mac not because I needed to or that I’d worn out the earlier ones (though it is true, I have bled over my keyboards) but because I wanted to try new ones. Right now I’m using Apple’s latest slimline thing, which observant people usually described with more pejorative words than “observant” will have seen used a lot in the Doctor Who story Silence in the Library. (Honest: I bought mine a year before that. Honest.)

But as well as the technical aspect, there’s also the fact that writing feels right to me on a keyboard, much more so than with pen and paper. This is undoubtedly because my handwriting is shudderingly bad. But Aaron Sorkin had a Sports Night character say once that “writing is a tactile experience” for him and he meant using the keyboard. I really recognise that.

And what goes through our minds while we type? As I wrote that last paragraph, an email came through: my fingers never left the keys and my mind never really left the thought but I went from typing text to pressing Apple-tab to skip to my Mail programme, I hit Apple-R to do a Reply, wrote text in that message, clicked Send then right back to this. Practically uninterrupted, certainly very smoothly, and yet I’m treating the keyboard in such different ways throughout. I’d even forgotten this: I also tapped a key that set iTunes playing a new Dar Williams track.

I get similarly anoraksic about offices and workspaces. So much so that the real reason I’m a month behind everyone else on this meme is that I thought, right, I’m going to tidy this bloody place up for once. For years I’ve had bookshelves around me with everything wedged on wherever it would fit. So, as if you were about to pop by, I tidied it up. I mean, I really worked on this. And all the way through I had this notion of precisely the photograph I could take that would show you how this office is a kind of nest, how it really does echo my personality as I believe all offices do of their creators.

But I took that photo just now and it’s appallingly bad. Instead, and I would underline that I’ve spent a month tidying this place, this is the photo that best shows where I work. And you can’t see a bloody shelf in it. I even hoovered. 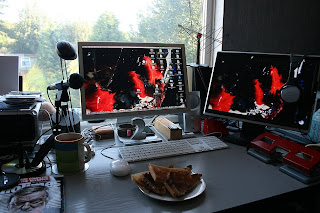 The toast is gone. The tea is a bit cold. But while you can’t see it, there’s a fox outside that window now. (Er, in the garden. I don’t mean he’s pawing at my first-floor window like a thing possessed and craving toast.) That is a BBC2 metal logo originally from a BBC press launch but given to me by a favourite friend. That is a Blake’s 7 teleport bracelet behind it but I feel no urge to discuss that any further. And there’s that keyboard. It’s very good. In between the keyboard and the BBC2 logo is a cutting block: from back in the day when you used to cut tape to edit it, when anyone did that, you used a block like this. There’s a central channel where you lay the tape, marked up with chinagraph pencil, and there are three slits for running your razor blade through. It always surprised me that colleagues didn’t know why there were three of them: they’re at progressively sharper angles and it changes how the edit sounds.

The image on the two monitors is mine: it’s a closeup photograph I took of a discarded piece of glass at a glass factory.

But, ah, go on, if you’ve read this far, you want to see the naff photograph, don’t you? And I appear to burn to show you. So: 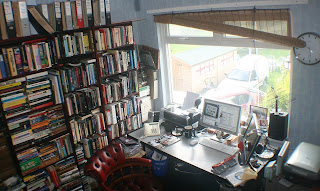 There aren’t usually cars outside the window: that’s my neighbours’ garden and they’re repairing both of those. From where I sit I can see five gardens, though I’ve never yet figured out how to get out to my own. It’s for want of trying.

I’ve also never once been able to straighten out that blind. But the clock the right side of it is managing to hide from me is a Rugby one: a clock tuned in to the Rugby transmitters. You should see it when the clocks change: it’s almost worth being up working that late to see the hands suddenly whiz around by themselves.

And just for completeness, if you sit in that great Captain’s Chair (that’s its name, I promise you) and look back to where I took the photo, this is what you see: 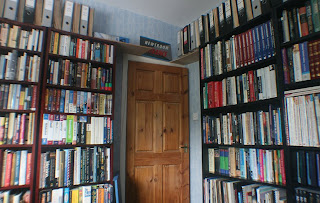 What you can’t see is that the bookshelves extend quite far either side: apart from the window and a small patch of wall where my Rugby clock is, this room is floor-to-ceiling bookshelves. Some of those shelves are of my own cunning design: look at the rows of folders on the very top: I’ve extended the bookshelves out with those planks of MDF in order to fit them all on. They’re still very disorganised but they amount to around 20 years of Radio Times issues that I use for my On This Day research. They’re broadly the 1980s and 1990s, which is the period Birmingham Central Library’s collection has the most gaps so it is a very great thing that I’ve got these.

Up in the corner there, where you can see two of my precarious new MDF shelves sticking out, there’s a BBC Newsroom Entrance sign. I like the idea that the rest of the world outside my office is a newsroom. But I also nicked the sign from BBC Pebble Mill when it was being redecorated. I don’t know why they bothered, really, since they’ve demolished the entire building since then.

One more picture? Just saying that about Radio Times reminds me. On the wall directly behind me there’s a gorgeously-bound set of RT issues from 1999 onwards for a couple of years. 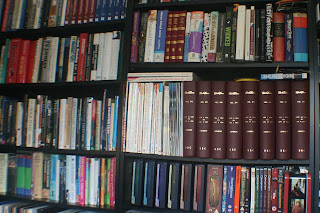 The curving on the left side of the shot is just because of the lens I happened to have on. But the curving under that shelf of the RT volumes is real and entirely down to the weight.

We’ll see who breaks first – the shelf, my resolve to keep this place as tidy as it is today, or you and whether you managed to get this far.